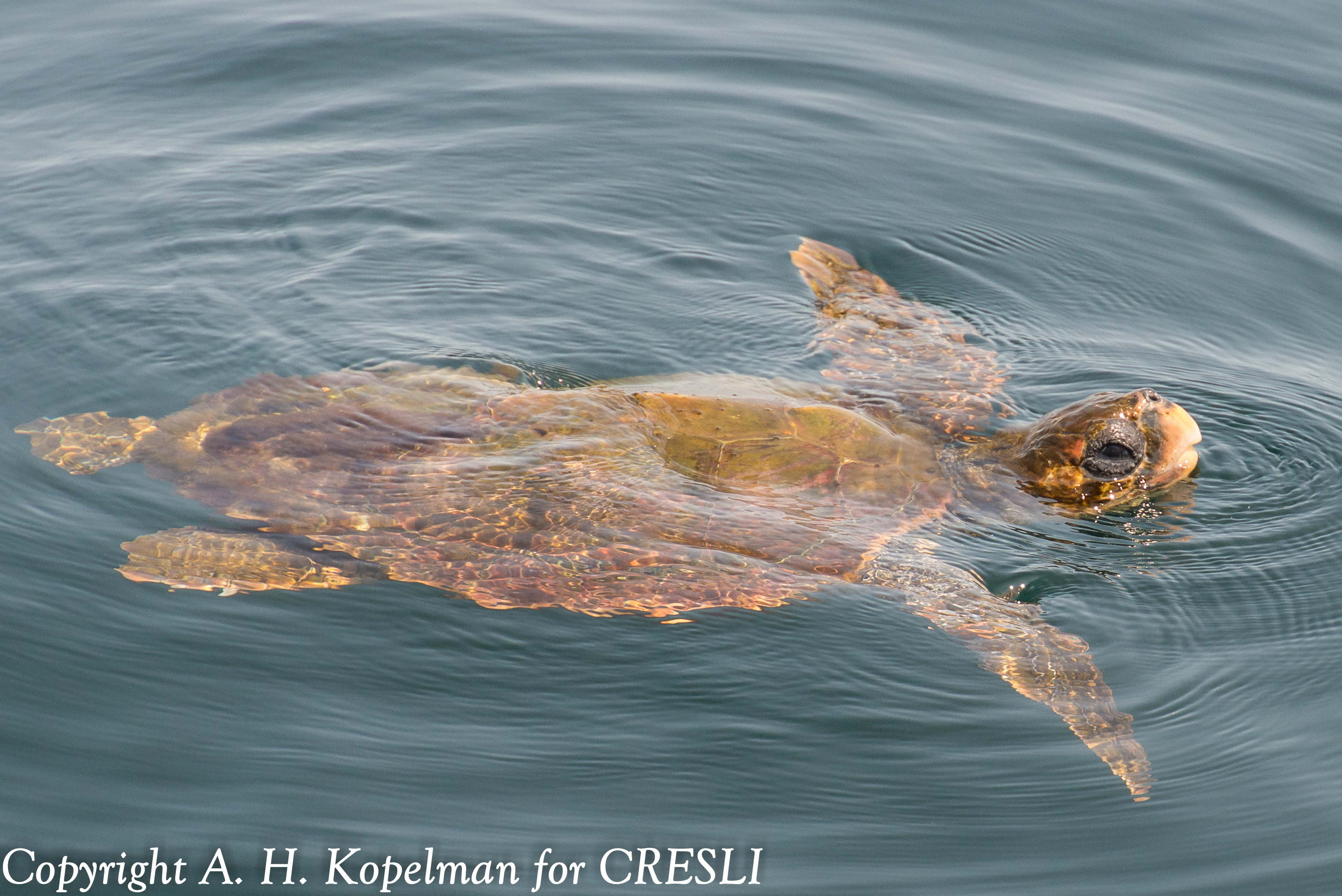 Sea turtles are large turtles that inhabit warm waters of our planet's oceans, bays and estuaries. They are similar to their terrestrial (land) cousins, the tortoises, and to freshwater turtles, except that their legs have been modified into flippers to aid them in swimming. Their shape has taken on a flattened, more streamlined appearance - tapering off in the rear to allow for less water resistance during swimming. All sea turtles except the leatherback turtle have a hard carapace (top shell) and another hard shell on the belly called the plastron. The carapace, as with all other turtles incorporates their backbone, sternum and ribs. This is unlike most other animals whose backbone and ribs are free of a shell or skin.

Sea turtles are closely related to ancient species dating back 130 million years to the Cretaceous Period. Some may be more closely related to dinosaurs than our present day reptiles.
Like all other reptiles, sea turtles' body temperature depends upon their surroundings which explains their migration southward as northern waters cool off in the fall. The leatherback turtle, though, has recently been found to be able to create some body heat, thus making them able to withstand the chilly waters off Canada and Iceland, where they roam in the summer. Sea Turtles are air breathers, but are capable of holding their breath for quite some time. It is thought that they are also able to absorb oxygen from their skin, mouth and their cloaca.

Sea turtles remain in the sea during their entire lives except for adult females who briefly come ashore to nest in the summer months. In the eastern US sea turtles are found mainly along the southern and Mid - Atlantic coasts, Gulf of Mexico and in the Caribbean Sea. During the summer months when the Gulf Stream carries warm water north as far as Canada, sea turtles, with the exception of the hawksbill, roam as far north as Cape Cod near the shore, while the leatherback ranges even further north.

There are five species of sea turtle in the North Atlantic Ocean - hawksbill, loggerhead, Kemp's ridley, green and leatherback Of these, the last four regularly inhabit Long Island's waters.

LIFE HISTORY
All sea turtles have a similar life history. Life begins as the males and females mate in spring and early summer in the waters near the nesting beaches. The females come ashore and deposit 80 - 200 ping pong ball-sized eggs in a thick fluid in the 20 - 30 inch deep holes they excavate. The nest is located in the sand on the upper part of the beach, often at the base of the dunes or vegetation line. Females may return to the nesting beach to lay up to 10 clutches of eggs in a season (except the Kemp's Ridley).

After the hot sand incubates the eggs for about two months the tiny hatchlings break through the leathery shell of the egg and scramble out of the nest to head for the water. Although this usually occurs at night, these tiny creatures are prey to many predators such as ghost crabs, dogs, foxes, raccoons, opossums and gulls. If they make it to the sea another set of predators, fish and seabirds, are waiting to pick them off. It is estimated that only a fraction of turtles that hatch actually survive this gauntlet, and less than 1% endure to maturity. Once in the sea, the turtles will inhabit offshore waters of the Atlantic Ocean and the Gulf of Mexico. They remain there for several years, sometimes taking refuge in large clumps of Sargassum weed that host a variety of small fishes and crustaceans which presumably the turtles feed on.

After two to three years loggerheads, greens and Kemp's Ridleys move into coastal waters in their northern range, where they spend their juvenile life. Locally, these three species of turtles can be found in Long Island Sound and Long Island's eastern bays where they feed on crustaceans (crabs, shrimp, lobster, etc.), shellfish and even small fish. They arrive here every year in late June as water temperatures rise, then migrate south to warmer waters by late fall.
Leatherbacks lead a different lifestyle. They appear to inhabit deep oceanic waters for most of their life feeding on jellyfish, which make up their chief diet. Adult and sub - adult leatherback turtles are found in Long Island's offshore waters. 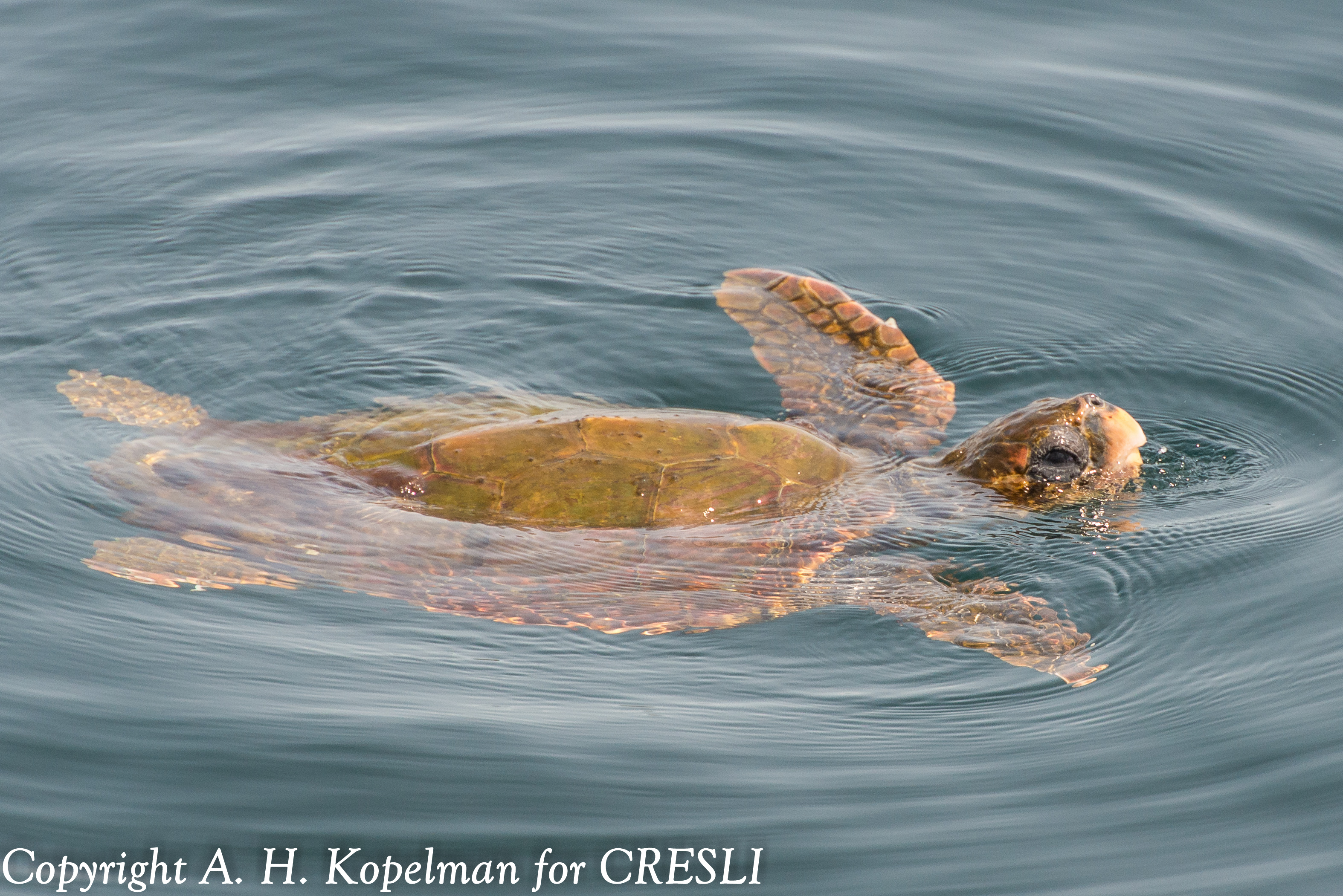 The most abundant of all the marine turtles, these handsome creatures reach 4- 5 feet in length and weigh up to 400 - 500 pounds. Loggerheads are reddish brown on the back and orange - yellow underneath. They often acquire barnacles and seaweed growing on their shells

These turtles once nested throughout the tropics and as far north as Maryland in the US. Although they are still quite numerous, their nesting range has diminished as man has invaded coastal areas for housing and recreation. Several large nesting beaches in Florida and the Carolinas can still be found, and attempts by local residents to patrol beaches to protect nesting females and hatchlings are paying off.

Juvenile loggerheads regularly inhabit Long Island Sound and the eastern bays where they feed mainly on crustaceans and shellfish. Some adults can be found along the ocean shore and in New York Harbor. As with all sea turtles, loggerheads are long lived. A mature female loggerhead was documented to live 33 years in captivity, while estimates of their life expectancy range up to 60 - 75 years or more.

The Kemp's ridley is the most seriously endangered sea turtle and among the most highly endangered species of the world. Although these unique turtles hatch in Mexico, and primarily inhabit southern waters, many juveniles travel up the warm current of the Gulf Stream to Long Island's waters each summer.

Unlike other sea turtles, female Kemp's ridley turtles come ashore to lay their eggs in the daylight hours. Also unique to their behavior, all females nest in large numbers at the same time (called an "arribada"), only once a year, at the same location. Only one nesting beach is known in the entire world along the Gulf of Mexico coast. They often crawl over one another to nest and their frantic digging can create a small sandstorm along the entire beach.

Much of the historical information on the nesting of these interesting animals comes from a single film made in the 1940's which shows approximately 45,000 females at the single nesting beach. Since then these numbers have declined drastically. As of 1990 the annual count of females returning to the one nesting beach was under 300 individuals! This number has risen in recent years to an estimated 400 - 500. Local residents, and wild and domestic predators have swarmed to this beach for years to harvest the plentiful eggs. Commercial shrimping and fishing has also contributed to this turtle's decline as animals become entrapped and drown. Efforts to save the ridley include modifying fishing gear to avoid their drowning, armed guards at the nesting site in Mexico and increased research on their biology and behavior.

Kemp's ridleys are a drab, dark olive green color on top, and light greenish underneath. Their large head has a prominent "beak" used to grab and break up crabs, shellfish and other hard shelled prey. By far the smallest sea turtle, ridleys reach 2 - 3 feet in length and up to 100 pounds as adults. As only juveniles come into our waters, they are often referred to as "dinner plate size," measuring about one foot in diameter and weighing 8 - 12 pounds.

These large turtles can reach up to 500 - 600 pounds and approximately 4 - 6 feet in length. A brownish or greenish color, their carapace is blotched with green, brown and yellow flecks. Their name comes from the greenish color of their fat called calipee. These turtles have been hunted for many years for their tasty flesh and the calipee which is often used in turtle soup. Although protected by law in the US, green turtle eggs are regularly harvested for food in many nations throughout the tropics. Their eggs are considered a delicacy and sometimes used as an aphrodisiac. These practices have led to a serious decline in their population numbers. Green turtles are a threatened species in the US with the exception of  3 populations where they are endangered.

On Long Island, juvenile green turtles can be found entrapped in fishing gear during the summer and a small number suffer cold stunning each year. They utilize Long Island's warm shallow bays and Long Island Sound to feed on crabs, crustaceans and submerged aquatic vegetation such as eel grass. 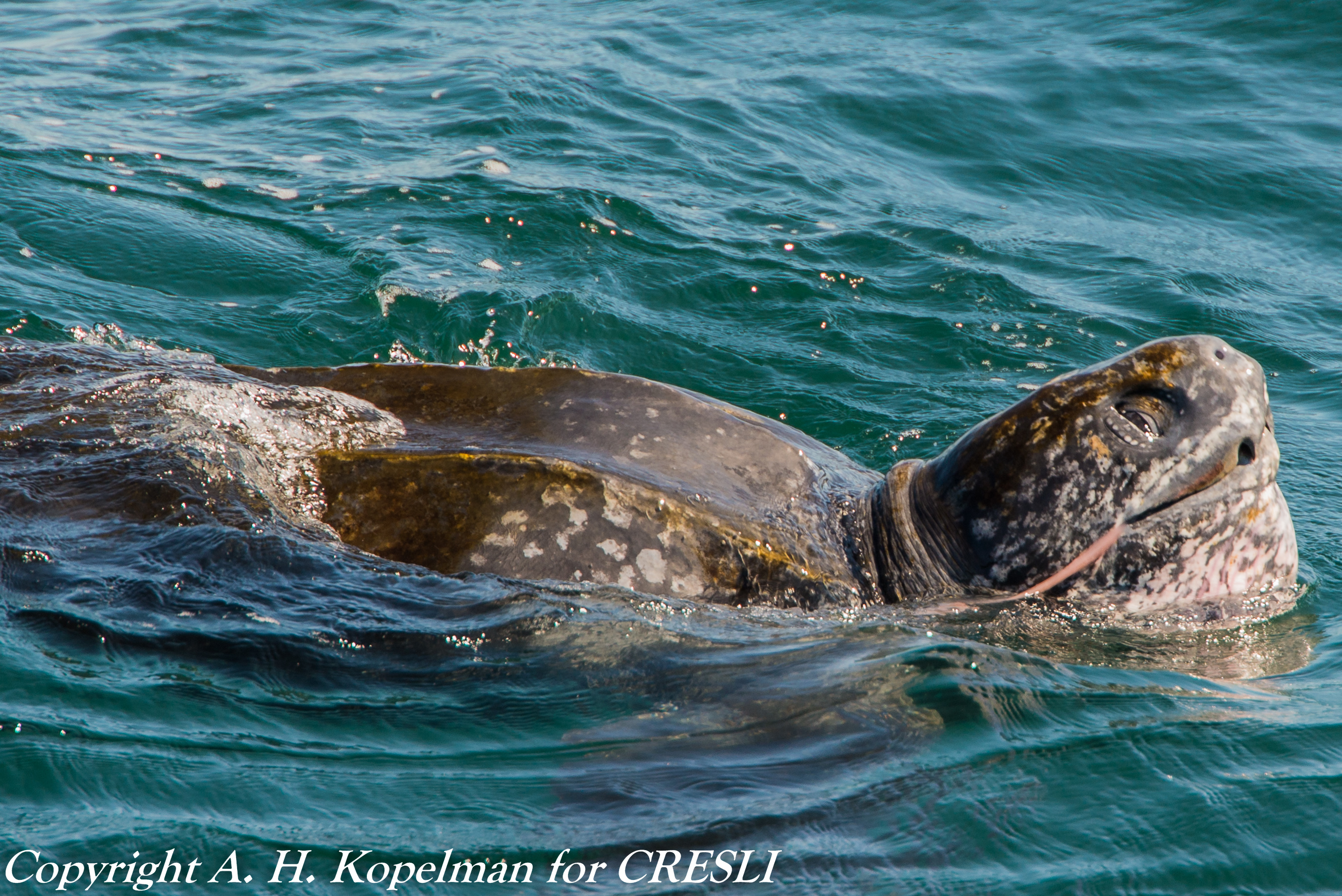 The giants of marine turtles, leatherback sea turtles are oceanic reptiles that can reach 6 to 8 feet in length and weigh 1,200 to 1,500 pounds. These dark green or black skinned turtles are often speckled with white or pink blotches. Their name comes from their leathery covered carapace, which is actually comprised of many thin, interlocking bone-like plates which make up the carapace.

These turtles are listed as a federally protected endangered species. Worldwide population estimates indicate a significant decline in numbers of leatherbacks between 1980 and today. This decline is attributed to a number of factors including loss of nesting habitats, destruction of nests by poachers, ingestion of marine debris, propeller wounds and interactions with commercial fishing operations.
Leatherbacks have several interesting anatomical features besides being "soft - shelled." They are able to maintain their core( deep) body temperature considerably higher than their surroundings. - disputing the traditional theory that all reptiles are "cold blooded." This extraordinary ability explains why leatherbacks can range as far north as Newfoundland, Greenland and Iceland where the sea temperature, even in the summer, is only in the 30 - 40 degree range. In addition, they are one of the few animals that feed exclusively on jellyfish. In fact, their esophagus has long backward pointing spines which aid in their swallowing such soft, slippery food.

Leatherbacks are commonly seen in Long Island's offshore waters during the late summer. They often bask or rest at the surface, which may explain why a number of them wash ashore mortally wounded by ship propellers. These unusual reptiles also fall victim to ingestion of plastics floating on the surface which resembles the jellyfish they catch for food.

The life expectancy of leatherbacks is not known, but first breeding is thought to be between 10 and 15 years old. Female leatherbacks come ashore to nest every 2 to 3 years in the warm sands of tropical beaches. Hatchlings must make their way to the ocean quickly to avoid predatory seabirds. from this time onward leatherbacks (with the exception of nesting females) spend their lives at sea.