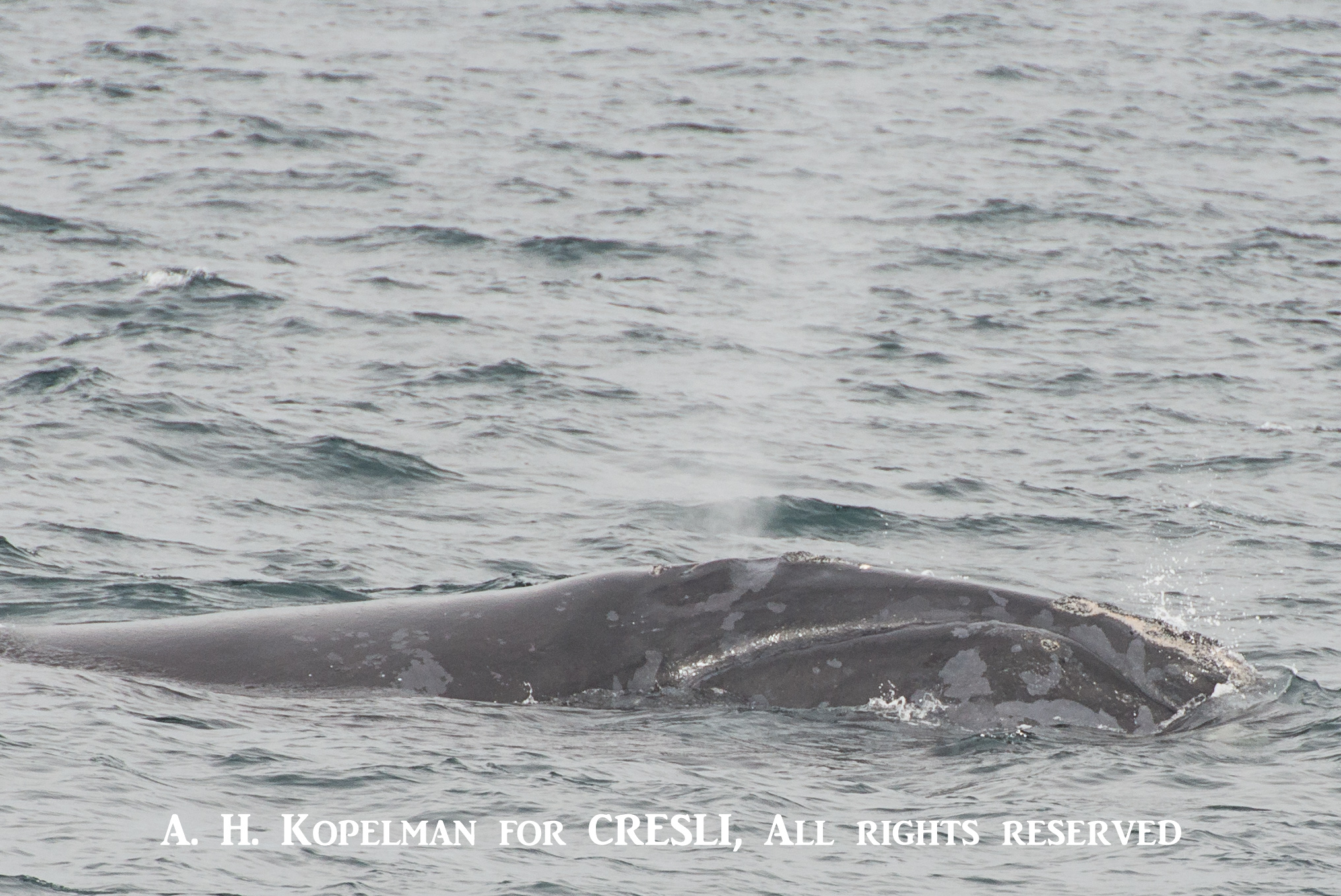 In 2020 the IUCN (International Union for the Conservation of Nature) lists the North Atlantic Right Whale as "CRITICALLY ENDANGERED."

The critically endangered North Atlantic Right Whale (Eubalaena glacialis) was named so because they were the "right whale" to hunt. They were the right whale to hunt for a variety of reasons, including slow swimming speed (4 knots maximum) ; floating after death; significant amounts of very long and flexible baleen; and significant amounts of blubber that could be rendered down into oil. Right whales were "protected" from legal hunting in 1935.

Studies of biopsied North Atlantic right whales indicate very little genetic variability within the population. This is assumed to be due to significant inbreeding, following the reduction of the population (population bottleneck) due to whaling. Reduced reproductive success due to inbreeding, coupled with the low reproductive rate of mysticetes in general, might partly explain the lack of recovery of Eubalaena glacialis.  Recent analyses indicate that the population bottleneck might pre-date whaling (Rastogi, et al, 2004).

Right whales feed almost exclusively on small crustaceans called calanoid copepods, and hence have a very limited food niche. Right whales calve in winter off the coast of Georgia and Florida, and can sometimes be seen in the waters off New York during their migration to and from their typical feeding grounds (the Great South Channel, the Gulf of Maine, the Scotian shelf, and now the Gulf of St. Lawrence, and elswhere throughout the Western North Atlantic). Sometimes right whales can be seen in NY's waters in the summer as well.

Kraus, et al (2005) state: "Despite international protection from commercial whaling since 1935, the North Atlantic right whale (Eubalaena glacialis) remains one of the most endangered whales in the world." Protective measures instituted via the Marine Mammal Protection Act (MMPA) seemed to have worked in the early part of the 21st Century and the North Atlantic right whale population grew to and estimated population size of 440-465 individuals. However, recent mortalities and lack of reproductive success may have dire consequences for this species.

"North Atlantic right whales’ abundance increased at about 2.8% per annum from median point estimates of 270 individuals in 1990 to 483 in 2010, and then declined to 2015, when the final estimate was 458 individuals (95% credible intervals 444–471). The probability that the population’s trajectory post-2010 was a decline was estimated at 99.99%. Of special concern was the finding that reduced survival rates of adult females relative to adult males have produced diverging abundance trends between sexes."

The continued loss of individuals to ship strikes and entanglements, as well as climate-change induced changes in prey distribution and availability have had devastating consequences and have left North Atlantic Right Whales in an even more precarious state that before.

86%of all NARW hae been entangled at least once in their lives.