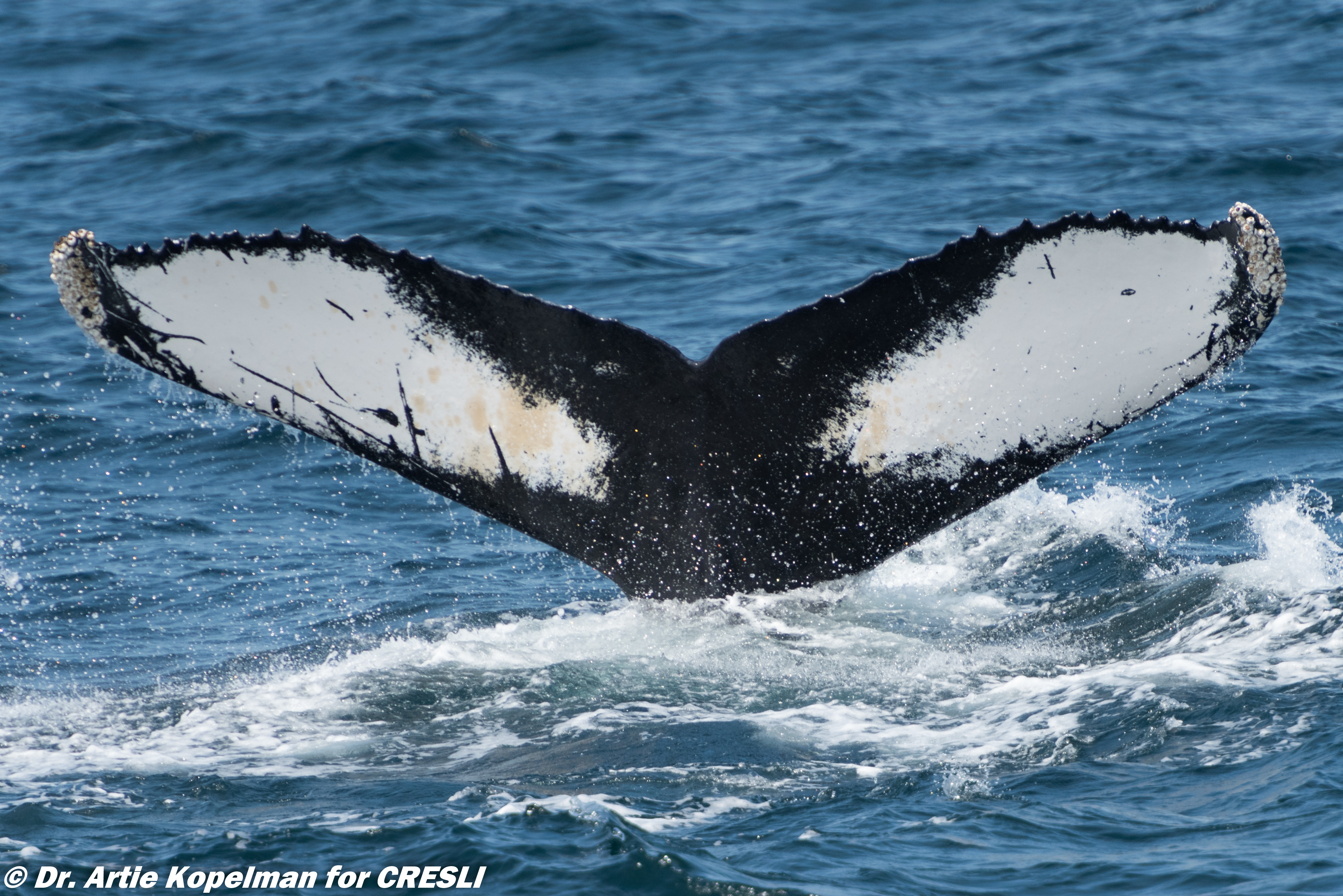 Whales, dolphins, and porpoises belong to an order of mammals known as the Cetacea (derived from the Latin term cetos or cetus, meaning large sea creature). Cetaceans and the Sirenians (dugongs and manatees) are the only two orders of mammals that are adapted to a fully aquatic existence.

Cetaceans evolved from land mammal ancestors about 53-54 million years ago (MYA) (Reynolds, Odell and Rommel 1999) and are represented by three sub-orders:

The cetaceans share common ancestry with today's Ungulates (hoofed mammals), and have now been placed into a group known as the Cetartiodactyls which also includes such animals as deer, antelopes, camels, pigs, hippopotami, and giraffes. Early analysis of fossil evidence led to the no longer accepted belief that cetaceans had evolved from mesonychians, an extinct group of archaic ungulates (hoofed mammals) (Berta, Sumich, and Kovacs 2015; Reynolds, Odell and Rommel 1999, Rice 1998). Recent molecular and anatomical studies have been interpreted to show that the closest extant relatives of whales are hippopotamids (Nikaido, Rooney and Okada 1999).

Recent and compelling evidence based upon analysis of several early cetacean skeletons (Ichthyolestes pinfoldi and Pakicetus attocki), support the hypothesis that cetaceans share common ancestry with Artiodactyls (even toed ungulates) such as deer, antelopes, camels, pigs, hippopotami, and giraffes, not mesonychians (Thewissen, et al. 2001). Thewissen et al. (2001) state that cetaceans "are not the sister group to (any) mesonychians, nor to hippopotamids." Their analysis "stops short of identifying any particular artiodactyl family as the cetacean sister group..." The recent work of Gingerich et al. (2001) also indicates that "Cetacea evolved from early Artiodactyla rather than Mesonychia ."

More recently, the Cetacea and Artiodactyla have been combined to form a phylogenetic clade known as the Cetartiocactyla.

As stated in the Animal Diversity Web:

"Cetartiodactyla is a group comprised of two orders of mammals that are superficially quite different and that, until recently, were recognized as two separate monophyletic clades. These orders are Artiodactyla, even-toed ungulates, including animals such as cows (Bovidae), camels (Camelidae), and deer (Cervidae), and Cetacea, a group of mammals that are highly specialized for an aquatic lifestyle, including baleen whales and toothed whales. Recent molecular evidence suggests that Cetacea evolved from artiodactyl ancestors, making Artiodactyla non-monophyletic unless Cetacea is included (http://animaldiversity.org/accounts/Cetartiodactyla/)"

Cetaceans are characterized by a variety of adaptations to their fully aquatic existence. These adaptations range from obvious morphological ones to subtler physiological ones.

The obvious morphological adaptations include:

The physiological adaptations are numerous including those involved in thermoregulation, buoyancy control, diving, water balance, sensory reception, reproduction, and communication, to name a few.

Odontocetes have teeth which they use to grasp prey but not for chewing. Typically, odontocetes swallow their prey whole. The teeth vary in size and shape from the large conical teeth of the largest odontocete, the sperm whale (Physeter macrocephalus), to small spade-like teeth of the harbor porpoise (Phocoena phocoena), to the lack of erupted teeth in the females of some beaked whale species.

Mysticetes are filter feeders and they don't have teeth as adults. Instead, baleen whales have overlapping plates of keratinized (keratin is a fibrous protein found in skin, hair, nails, hoofs, and feathers) tissue called baleen hanging down from their upper jaws. Each baleen plate is shaped somewhat like an elongated triangle, with the short end replacetagded in the upper jaw at right angles to the long axis of the jaw; one edge of the triangle is smooth and faces outward, while the inner edge is fringed with bristle-like or hair-like keratinized tubules. These collectively form a filtering mat of fibers. In one way or another ("gulping" or "skimming") baleen whales take in mouthfuls of food and water, force the water out through the baleen plates and trap food organisms. The amount of food, types of food, and volume of water varies with species, individual, and conditions. It is interesting to note that the size, shape, and texture of the bristles vary with species and their typical prey. For instance, the baleen bristles of fin whales (Balaenoptera physalus), which have a broad potential food base of relatively larger organisms (including small schooling fish such as sand eels, herring, bunker, tinker mackerel; squid; and crustaceans such as copepods and euphausiids), are very coarse. However, the baleen bristles of northern right whales (Eubalaena glacialis) which feed almost exclusively on calanoid copepods are much finer.

Mysticetes and odontocetes differ in an array of other features as well. The shape of the mysticete skull is subtly asymmetrical, while that of the odontocete is extremely asymmetrical. Odontocetes have single blowholes, while mysticetes have double blowholes. Most odontocetes are highly social (gregarious) animals, living in relatively stable social groups, while mysticetes are solitary animals, found in groups only under certain conditions (mothers and calves; courtship and mating; when there is an abundance of food). Odontocetes and mysticetes differ in size related sexual dimorphism (differences in size between males and females). In mysticetes, females are larger than males of the same age. In odontocetes, typically, males are larger than females of the same age, although there are some taxa in which males and females are the same size (Kogiidae), and some in which females are larger than males (harbor porpoise, river dolphins, and beaked whales) (Reynolds, Odell and Rommel 1999).

Nikaido, M., A. P. Rooney and N. Okada. 1999. Phylogenetic relationships among cetartiodactyles based on insertions of short and long interspersed elements: Hippopotamuses are the closest extant relatives of whales. Proceedings of the National Academy of Sciences, USA 96: 10261-10266.

Scientists from the Coastal Research and Education Society of Long Island have been studying cetaceans (whales, dolphins and porpoises) for over two decades. Dr. Artie Kopelman, have been investigating fin and humpback whale populations and conducting population and distribution surveys for other cetaceans in New York's waters. In 1996/97 these studies were extended to the Caribbean. As a population ecologist, professor, photographer, and SUNY Distinguished Service Professor Emeritus, Dr. Kopelman brings his acquired experience and knowledge to CRESLI's research and educational projects. A number of college and graduate students and volunteers from all walks of life assist with data collection and analysis.

Cooperative alliances with institutions such as Gotham Whale, Atlantic Marine Conservation Society, the Thorne Lab at Stony Brook University, and the Wildlife Conservation Society has led to several papers being prepared, and has formed an unnoficial NY Whale Collaborative. Working together, conducting research together, sharing resources, and coordination of activities, significantly enhances the opportunities for research and public education.

CRESLI's cetacean research goals are multifaceted, and mainly directed at photo identification (particularly of fin whales, sperm whales and humpback whales) and collection and analysis of basic ecological and behavioral data from all cetacean species encountered.

Data collected by CRESLI scientists over 25 years indicate that 19 species of cetaceans have been found in and/or utilize Long Island's waters.