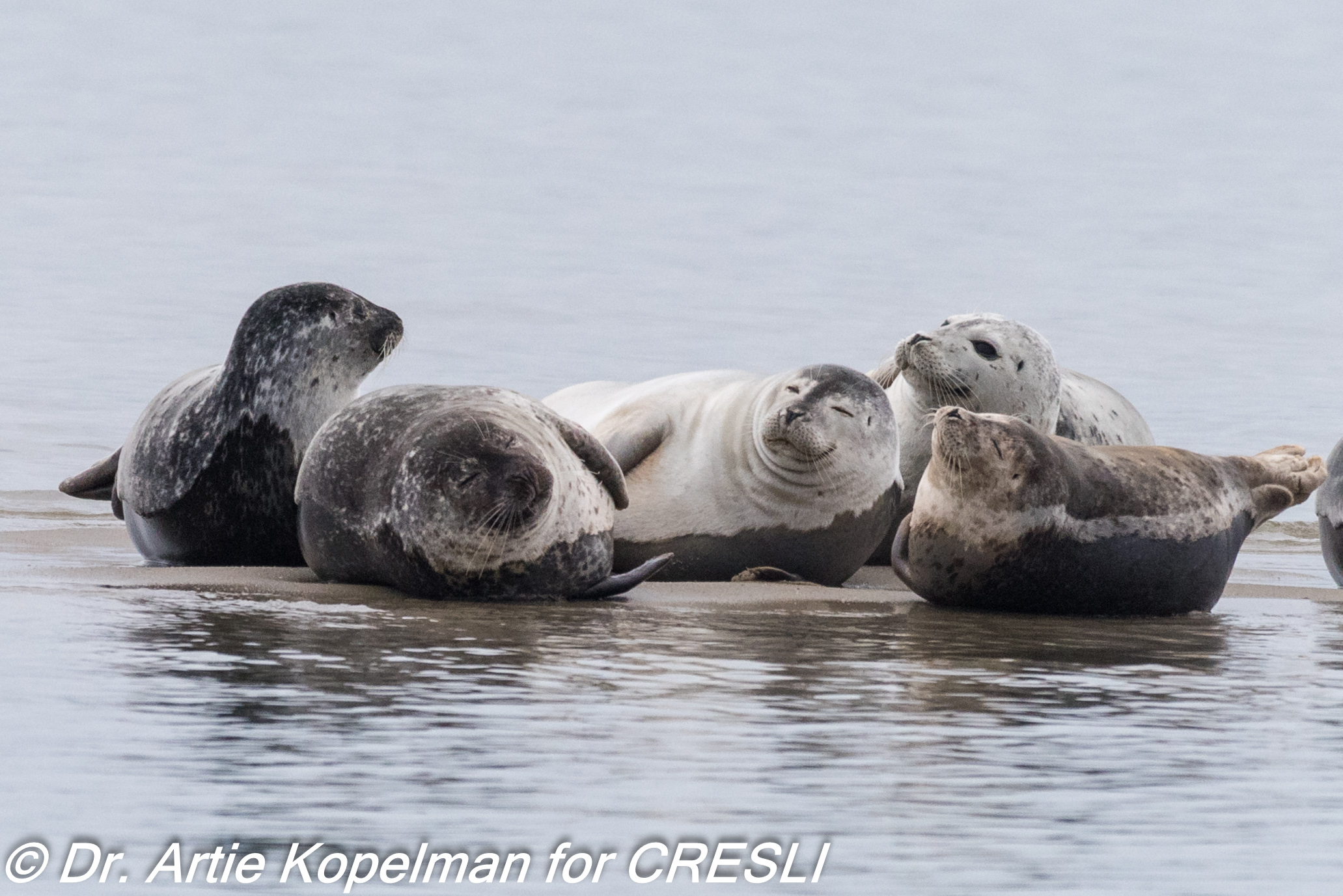 Seals belong to the group of mammals called Pinnipeds (from Latin: pinna which means "feather" "wing" or "fin" + ped, derived from pedis meaning "foot"). Within the pinnipeds there 3 sub-groups, the Phocids or true seals (also called "hair" or "earless" seals), the Otariids (also called eared seals) which include fur seals and sea lions, and the Odobenids (Walrus). Pinnipeds are thought to have evolved from carnivorous ancestors, probably the Ursids (bears) about 25 million years ago.

All seals have torpedo-like body shapes that enable them to swim swiftly through the water. Seals inhabiting icy regions have long sharp claws which dig into the ice to help them climb out of the water.

Seal, like other marine mammals, are adapted to stay warm by having blubber, fur or hair, and an effective counter-current heat exchange system.

While seals are marine mammals, they are also tied to the land/ice for two things, birthing and resting. Seals regularly leave the water on to land, or structures, in order to rest in a behavior know as hauling-out. When hauled-out, if they are undisturbed, seals will eventually sleep and like us, shut down both sides of their brains. Seals can also rest in water, but need some level on consciousness, and like whales and dolphins they shut down half of their brains at a time. 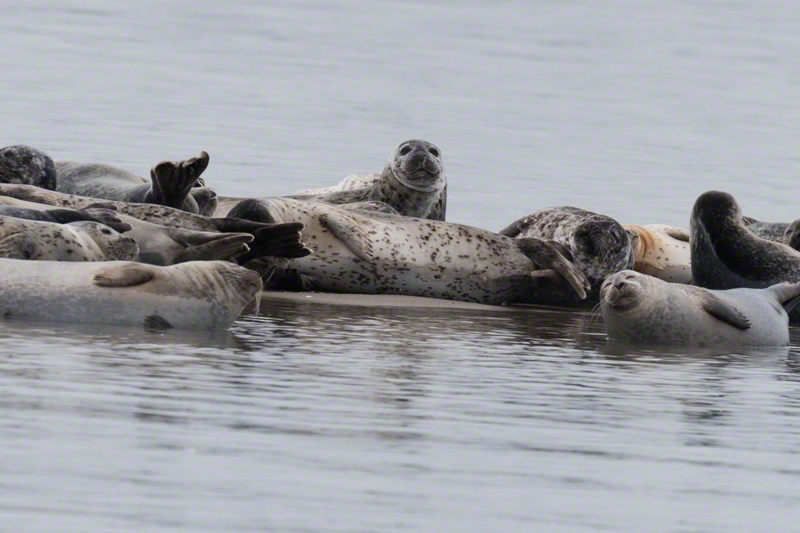 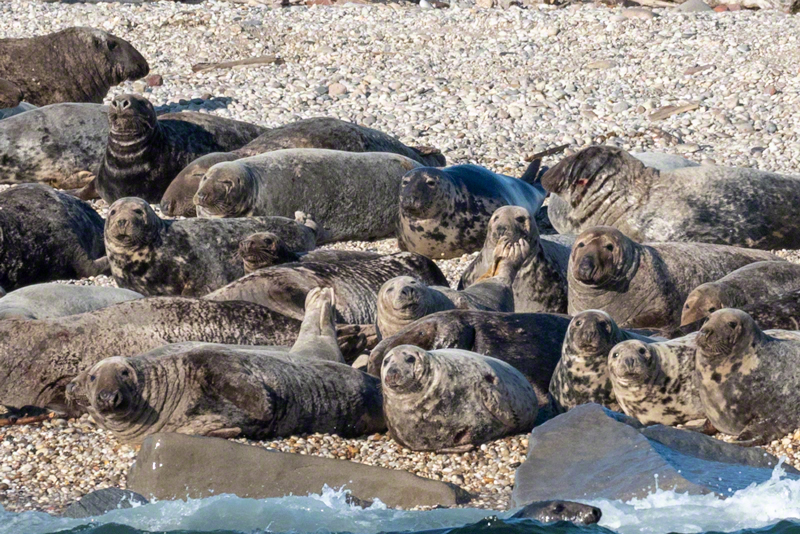 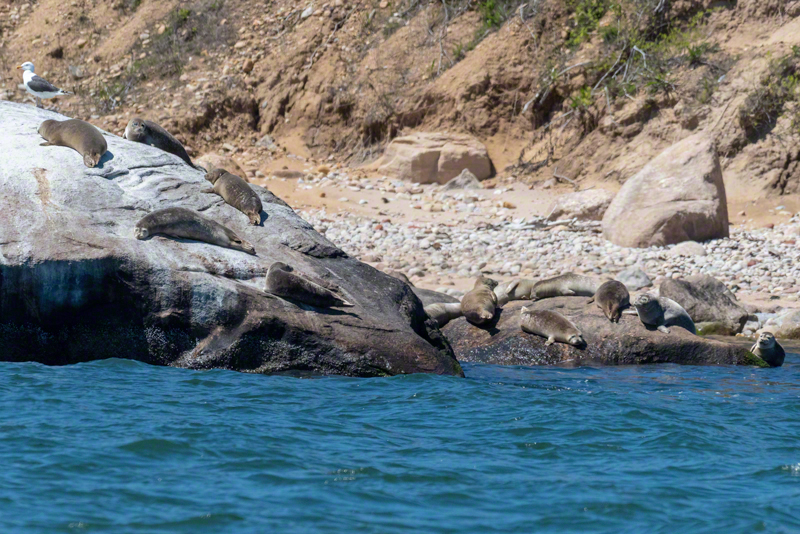 All seals native to Long Island are phocid seals!

True seals include all of the five species found on Long Island in recent years: harbor, grey, harp, hooded, and ringed seals. True seals have no external ear flap. Instead, they have a small flap of skin that closes over the ear opening when they dive. Their front flippers are short and haired and equipped with large claws, while the hind flippers are webbed and directed backward. The rear flippers propel the seal through the water by side to side sculling. On land these seals crawl along clumsily by humping the body like an inchworm, but they are swift and agile in the water, often covering long distances during migration and in search of prey. Phocid seals are generally deeper divers than the Otariids or the Odobenids. Seals have been recorded swimming at over 12 knots (more than 15 miles an hour), and local fishermen have reported seeing seals over 70 miles off long Island's shores.

Harbor seals are our most common seal, making up about 95 % of Long Island’s seals. Gray seals are next, at 4%, and the arctic seals (harp, hooded, and ringed) make up the other 1%.

While there are about 30 seal haul-out sites known for Long Island, CRESLI and Dr. A. Kopelman have been compiling a catalog of harbor seals that utilize the haul out site at Cupsogue Beach (near Moriches Inlet) for the past 16 years.

As of April 2020, the Cupsogue harbor seal catalog contains 213 seals that are identifiable based upon pelage marking patterns. Several of these seals have returned every year since 2006, other have returned less frequently but still return to use that site. The catalog is part of an on-going long term study of site fidelity and population dynamics. Sample photos of identified and named harbor seals can be seen here.

Not native to Long Island

Sea lions and fur seals are quite different from true seals. Their long flexible front flippers and versatile hind flippers enable these mammals to actually run on land and their long agile necks give them the ability to catch objects on their nose as seen in aquariums. The fore flippers propel the animal through the water. The males and females of most true seals are close to the same size, whereas male sea lions and fur seals are often much larger than the females.

Not native to Long Island

There are two subspecies of walruses: Odobenus rosmarus rosmarus(Atlantic) and Odobenus rosmarus divergens (Pacific). Odobenus from the Greek "tooth walker," probably refers to the walruses' method of pulling themselves up onto the ice using their tusks. Today, Atlantic walruses inhabit the coastal waters of Canada and Greenland. They had extended as far south as Cape Cod, but were extirpated by hunters by 1800. Walruses primarily feed on mollusks but may take other benthic (bottom dwelling) invertebrates.

Seals are protected by the MMPA (Marine Mammal Protection Act) against being killed or harassed without a permit. The MMPA defines harassment as anything that caused an abrupt change in behavior of a marine mammal. Harassment can cause significant stress to seals and should be avoided at all times. Many of the harbor seals on Long Island are pregnant and like others, resting is important and should not be disturbed.

Let’s enjoy our marine mammal companions and let’s make sure that they can exist without problems.