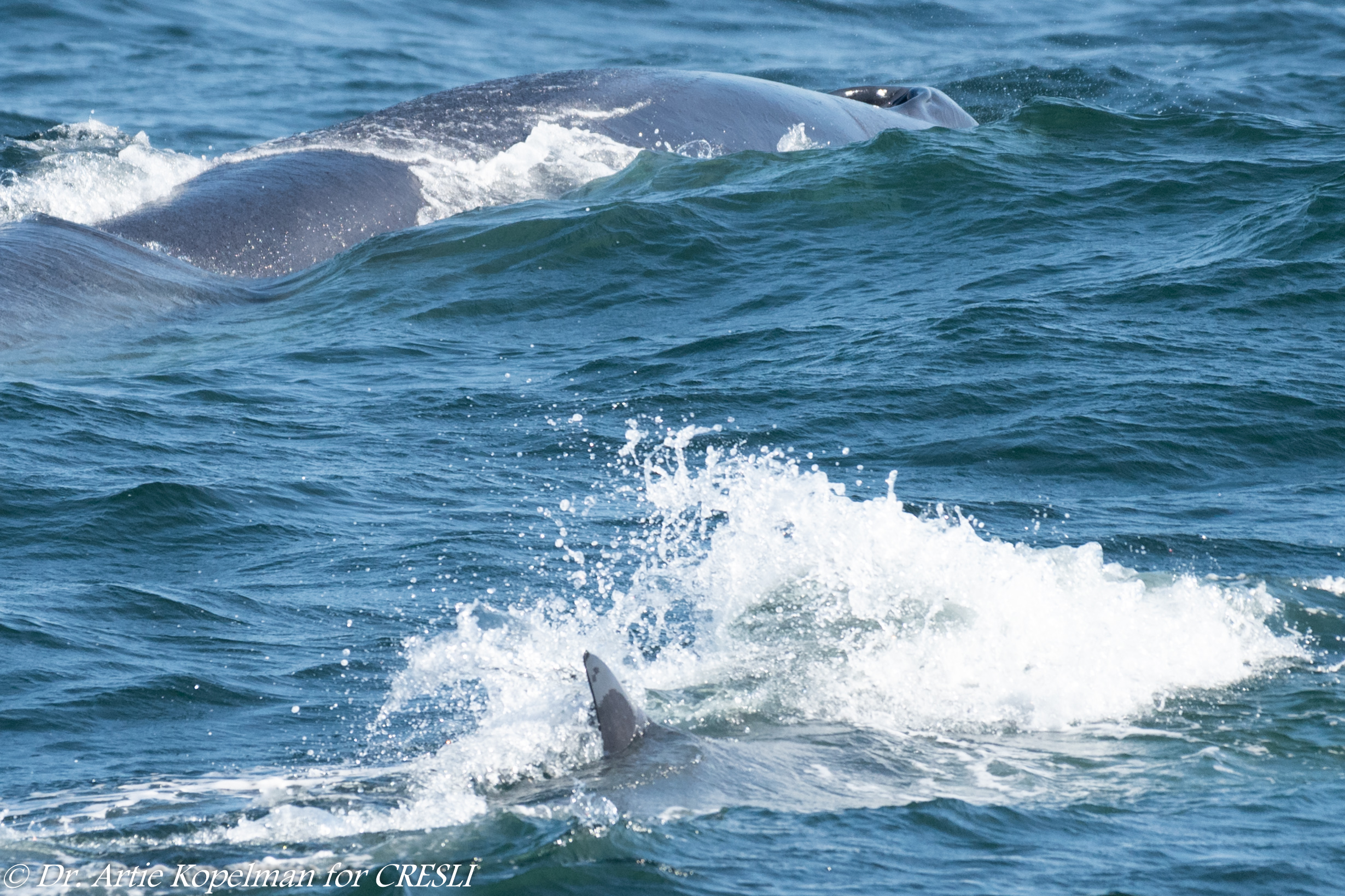 Join the crew with over 30 years of whale watching experience. Come away with great memories, great photos and videos, and an education about whales, dolphins, sea turtles, and marine life that is second-to-none.

Please note that the Viking Fleet supports CRESLI's work through in-kind donations of providing the vessel and vessel crew, and some funds per trip. We are eternally grateful to the Viking Fleet for our decades of collaboration

The Viking Fleet and CRESLI are offering special family friendly marine cruises focusing on the sights of the ocean! Enjoy a day on the water with your family looking for whales, dolphins, sea turtles, sea birds and sunfish. Along the way you can view the Montauk lighthouse and all the landmarks of the east end.

A qualified naturalist / marine biologist will narrate the tour and answer all of your questions!

The Viking boats are equipped with clean restrooms, comfortable seating and full galleys onboard. We recommend reservations. You can either do so by phone (631-668-5700) or https://vikingfleet.com/activities/whale-watching/

Fin whales, humpback whales and dolphins! What a way to start the season!

We started with a sad sight of a dead leatherback turtle (Dermochelys coriacea) and hundreds of Wilson's storm petrels (Oceanites oceanicus) feeding on the decaying carcass. It was shortly thereafter that we saw our first group of 20 short-beaked common dolphins (Delphinus delphis) as we headed towards where we were hearing reports of whales. Soon we saw another group of about 30 common dolphins, then a large group of about 120 of them. WOW!

Later we saw our first whale blows. Two fin whales kept us busy for quite some time. Our third fin whale showed up as we were trying to leave. Eventually we had to leave, but on the way back we passed two more fin whales and one humpback whale. They were two far away to head towards, but were seen none the less.

It was another amazing trip and a continuation of our phenomenal 100% sighting success since last year! We found "the mother load" of whales about 18 nautical miles from the point. Our first whale was a beautiful minke whale, followed shortly thereafter by a mother/calf pair of fin whales. While observing these, we saw blows all around us- perhaps a total of 12 fin whales. We spent time with the pair, then headed to another fin whale followed the pair to form a trio. We then spent time with another cow/calf pair for a bit. During our movements to observe the whales, we were surprised by a pod of offshore bottlenose dolphins (20). They rode our bow, took off and returned time and again to the delight of everyone on board.

We were only 8 miles off Montauk Point when Captain Carl spotted the first whale, a lone fin whale traveling SW. We followed it for a while and it proved to be a great introduction to a day of whales and dolphins.

Shortly afterward a pod of 20 short-beaked common dolphins streaked over to our vessel and spent some time bow riding and “porpoising ” alongside the Starship, to the delight of the passengers. The children aboard especially liked seeing the mothers and babies as the pod visited us several times over the course of a half hour.  We continued SE, seeing shearwaters and storm petrels, and stopped to watch the antics of a 4 foot long ocean sunfish alongside the boat.

As we made a long turn back to Montauk we found several other whales actively feeding. The three fin whales included a cow/calf pair and we stopped and observed them for some time. A smaller minke whale was also diving to feed on the scattered pockets of small fish below us. Another (or some of the earlier?) pod of common dolphins joined us too and there was a lot of action around the boat. Sadly our time was up and we headed back to Montauk to disembark a happy group of whale watchers.

The day started with about 150 bottlenose dolphins just outside jetty and over towards Shagwong. We went offshore to find whales where they had been reported. Our first whales were mother/calf pair of fin whales, then a minke, then we started seeing blows everywhere! There were whales in every direction. We eventually were able to get up and photograph 15 fin whales including 4 calf's with their moms. 2 minke whales, and we also saw an ocean sunfish just before the rain got heavy. What an AMAZING trip!

Our 100% Success at finding cetaceans continues. We found inshore bottlenose dolphins shortly after passing the Lighthouse. A group of 10, tthat joined with joined with 20 others. The group included lots of young dolphins swimming with their moms. We headed out further and found a young loggerhead sea turtle, Later we found flying fish, a hammerhead shark,  a Mola mola (Ocean Sunfish), and a small leatherback passed by us. We found no baleen whales, but had a good trip none the less.  WOW! We found another leatherback near the lighthouse and got great views of it feeding on jellyfish.

We decide to head west and then south towards some reported sightings. On our way west, we saw a few blows off about 2 miles away. As we turned toward the whale, we saw it do a full body breach - a beautiful sight! We stayed with that whale for some time. It was busy feeding at the bottom, with 5-7 minute down times. It fluked just a few times, but gave us some nice views anyway. After a while we decided to move on search for others. The ride was fun, kids were having a ball on the rolls and dips. All was fine, until the rain, which kept getting stronger as we searched. No more whales, but lots of happy and wet passengers.

Our 100% Success at finding cetaceans continues. We started the day finding a very elusive minke whale- a real 'Stinky' minke that dove and disappeared as we approached. We continued to search and were rewarded by finding a large fin whale south & east of Block Island. This whale provided us with great opportunities to see both right & left side, as well as its head.The 70 foot female fin whale was one we saw last year with a calf. This year she is was back again.

We headed east towards where we had seen whales on Wednesday and where colleagues had seen whales yesterday. As we headed a little over half way there we saw our first blows. A small fin whale was ahead of us- then a larger fin whale blow behind us! This was a mother/ calf pair. They eventually joined each other and surfaced near us when a third fin whale joined the pair. The 3 whales stayed together briefly then seperated. We were able to spend time with each of the 3 whales. As we headed back we encountered a hammerhead shark that gave us great views. It had a hook in its mouth, either it had been caught and released or broke free. In any event, it seemed to be doing okay.

We started in fog but it cleared as we approached Montauk Lighthouse. We headed east towards where whales had been spotted yesterday. On the way we found 2 groups of common dolphins, one with 10 individuals, the other with 15. We also found three leatherback turtles on the way to the whales. We found two fin whales SE of Block Island. One of the two had propeller scars and had been seen by us 10 days prior, while the other had been seen by us last year just 12 miles SW of Montauk. These whales provided us with great looks & data. We eventually left them to see a massive aggregation of about 120 common dolphins.

Today we had reports of fin whales far to the east and others closer to the west and south. We headed south and found a group of about 10 short-beaked common dolphins just after 11am. We stayed with them for a while and left in search of larger cetaceans. It took a few more hours but we eventually found the fin whales- first one, then a pair, then more and more until we encountered 8 fin whales and 1 minke whale. There was lots of food in the waters, hence the whales were busy feeding, as were a group of about 10-12 common dolphins. A long day, but successful! We are still at 100% success!

It took a while to get to the whale grounds, but it was well worth the wait! Fin whales and minkes were everywhere. We saw individual fin whales, pairs and trios all feeding (along with minkes) on massive quantities of prey. The fin whales were very active, engaged in surface lunges, rolling over and circle feeding. At points, we were surrounded by whales. As we headed home, we encountered one more pair of fin whales. One of the pair dove and lifted its fluke- a behavior rarely seen and we were lucky enough to see and photograph it!

We departed Montauk and travelled 20 miles offshore. Immediately about 2000 feet off the lighthouse we spotted juvenile false albacore tuna leaping on bait.

Once we got further offshore, into the remnants of the warm-core eddies of the Gulf Stream, it didn't take long to see our first blow. As we got closer we found two massive adult Finback Whales and one juvenile. We rode along side as they moved east for a good 30 minutes observing what looked like two animals that were as long as the Starship itself!! The whales were lit up in the blue water and the picture opportunity was just outstanding.

CRESLI is a non-profit organization as defined in section 501 (c) (3) of the Internal Revenue Code. All Contributions are deductible to the fullest extent of the law. A copy of the last financial report filed with the Department of State may be obtained by writing to NYS Dept. of State, Office of Charities Registration, Albany, NY 12231.