These large seals inhabit remote islands and shoals on both sides of the northern Atlantic. In North America most live along the Canadian Maritime provinces, although smaller numbers are found along the shores of New England and New York. Their distinctive long nose has earned them the name of "horsehead." Their scientific name means "hook-nosed pig of the sea." Gray seals have color patterns that are similar to, but bolder than those of harbor seals. 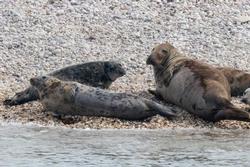 Gray seals are sexually dimorphic in size. Males grow to 8 feet and weigh about 800 pounds, while females are smaller, growing to 7 feet and weighing about 400 pounds. Female gray seals are estimated to live to at least their mid 30's. Males are estimated to reach only their mid 20's, which may be a result of the fierce competition between males for mating rights with the females. The mating system for gray seals is polygynous (poly = many; gyny = female), in which males mate with many different females. Mating occurs on land and at sea.

In March 2006, CRESLI's Dr. A. Kopelman noticed what he believed to be a possible gray seal rookery on Little Gull Island, in eastern Long Island Sound. Prior to then, the nearest gray seal pupping area was thought to be in Nantucket Sound, on Muskeget Island, west of Nantucket Island. The status of this rookery has yet to be confirmed.

Breeding takes place on rocky or sandy islands or land fast ice after pups are weaned. Newborn pups averaging 3 feet and weighing about 35 pounds are born in January and February. Pups are born with a creamy white coat called lanugo ( a reminder of their ancestral association with ice), which is shed shortly before the mother leaves them at about 3 weeks of age. Unlike the harbor seal, grey seal pups are rather helpless, staying on land in the birth area while the mother attends to them.

Like all phocid seals, grey seal pups undergo a post-weaning fast for gray seals this lasts about 2-months.

CRESLI seal walks at Cupsgue Beach and Seal Cruises with the Viking Fleet in Montauk can be found in the calendar of events page.