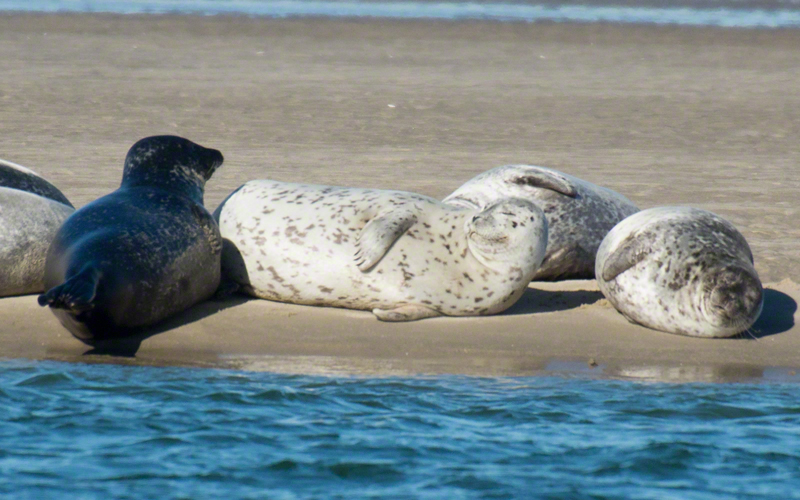 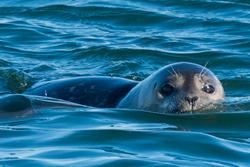 Named common seal throughout Europe, this seal frequently observed around Long Island lives along the shores of eastern Canada, New England and in the winter, as far south as the Carolinas in a variety of habitats. Their scientific name loosely means "sea calf" or "sea dog." This latter nickname is well suited as these seals closely resemble a dog when their head is viewed at the surface of the water. Harbor seals can be viewed in small groups hauled out basking on sand bars, rocks or remote beaches, sometimes popping their heads up in the waters nearby. Usually wary of humans, they are known to follow fishing boats, feeding on the scraps thrown overboard and occasionally harbor seals will haul out on someone's dock or even on their boat.

When first hauled out, harbor seals often lie with their heads and hind flippers elevated in what is often referred to as the "banana-like" position (see photo above right), but eventually will drop heads and flippers and sleep.  While sleeping out of the water, both brain hemispheres are shut down. 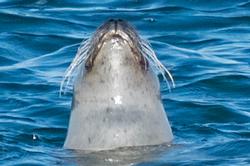 When resting in water, harbor seals can be seen in what we call the "bottling" position, with heads tilted straight back and perpendicular to the surface; thus assuming the appearance of a floating bottle. While sleeping in water, only one brain hemisphere at a time is shut down to rest, thus insuring some level of consciousness to reduce the risk of drowning.

Male harbor seals generally grow to 5 - 5 ½ feet in length, weighing 300 - 350 pounds, while the smaller females reach approximately 4 ½ to 5 feet, weighing 150 - 240 pounds. Harbor seals are thought to live to at least 30 years. Males mature at 4 - 6 years, females earlier. Pups, weighing 12 -20 pounds and measuring about 2 ½ feet, are born in the spring. Unlike many other seal pups, harbor seals are able to swim from birth, although they are dependent on care and milk from the mother for 3 - 6 weeks before they venture out on their own. While tending their young, harbor seal mothers are very protective and will sometimes push the pup beneath the surface or carry it on her shoulders to avoid danger. Harbor seals have been shown to dive as deep as 600 meters; their average dive time is 2 minutes and the maximum dive time is 15 minutes (see Costa and Williams. 1999. Marine Mammal Energetics. (figures 5-25 and 5-26) in Reynolds III, J. E., and S. A. Rommel (eds). 1999. Biology of marine mammals. Smithsonian Institution Press).

Harbor seals, like most other seal species, migrate southward every winter, returning to New England and Canada in the summer. On Long Island a large influx of these seals arrive in November and remain through mid- May, although some are thought to stay throughout the year.

CRESLI has been monitoring harbor usage and site fidelity at a haulout site in Moriches Bay for 17 years. Since 2006, we've had over 30,400 seal encounters in 496 trips (as of 3/31/22). 226 harbor seals are included in our Moriches Bay harbor seal catalog.  Many of those seals can be seen at https://drartiek-cresli.smugmug.com/Pinnipeds/Cupsogue-Identified-harbor.

CRESLI seal walks at Cupsogue Beach and Seal Cruises with the Viking Fleet in Montauk can be found in the calendar of events page.