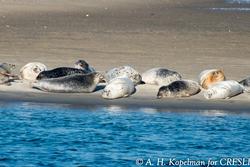 The CRESLI Seal Research Program monitors seal populations and continues to conduct a long-term behavioral and population studies of seals around Long Island, including regular observations at a major haul out at Cupsogue Beach Park. Population counts at Cupsogue over 13 years and elsewhere over the 19 years have indicated a significant and continuing increase in the number of seals utilizing Long Island's waters, as well as shifts in the species residencies and composition. Historically, Long Island's seal species typically included Harbor  and Gray seals, which are relatively abundant in our waters from late fall until late spring.  In recent years,  "arctic" species such as Harp, Hooded and Ringed seals that were once extremely rare for Long Island, have also become more commonly sighted.

Seal surveys can be conducted using land-based, aerial and shipboard platforms concurrently (if possible) in order to assess the accuracy of each count. During aerial and ship-based surveys two population estimates are produced. First a visual estimate is made by observers in the field. Subsequently, high resolution digital images taken from the aircraft and vessels are viewed and counts are taken. Differential counts are made for animals at or above the water's surface and below the surface, producing an accurate count. The shipboard surveys produce an estimate by counting and photographing the animals. The shipboard surveys are subsequently used to assess the sex ratio and age composition of the animals at these sites.

Based upon the studies conducted by CRESLI and other groups there are 26 sites around Long Island that seals have been found to occupy. These include sites as unusual as some in Ny Harbor, one in the shadow of Kennedy Airport, and as remote as Fishers and Plum Islands. Seal surveys are integral parts of CRESLI's Seal Research Program. Many students and volunteers assist in these long term studies.

Site monitoring is conducted at one or more specific haul out sites. Detailed observations are collected as part of a long term behavioral study to better understand feeding, mating and social organization of seals. This project includes recording the age and sex structure of a group of seals, and the specific interactions of particular individuals based upon recurrent observations of the displays and other interactions.

CRESLI's Seal Research Program includes photo-identification of harbor and gray seals using  high resolution DSLR cameras.  This is the only such study in NY, and longest running and most comprehensive one of just a few on the east coast of the US.

Contributions to CRESLI from seal walks and other activities have enabled us to purchase the necessary equipment to conduct this new research.  Thank you.